We're Not for You

“We’re not for you.” These may be the most empowering words in your branding arsenal. Once they learn the phrase, our clients delight in saying it, over and over, just for the sound of it. It doesn’t make sense in this era of scarce resources that we might actually turn a prospect away by saying, “We’re not for you.” But it might be exactly the right thing for your brand to do.

Great brands have always been good at clearly defining their sweet spot customer. Once they know who the right customer is, they can develop a brand promise that motivates that customer, and then can deliver on the promise in ways that delight them. But the unexpected truth of customer targeting is that great brands are just as good at defining who they’re NOT for, and then letting those customers go to a competitor.

One of our favorite recent examples of this concept is the “Most Interesting Man” campaign from Dos Equis beer. Most women we know don’t get this campaign, but the men in our lives love it. And one line resonates with them more than any other: “I don’t always drink beer, but when I do, I drink Dos Equis.” In other words, “if you’re one of those beer-swilling frat boys who drink Bud Light from sunup to sundown, we’re not for you.” The brand manager for Dos Equis credits the Most Interesting Man for increasing the brand’s market share by 22% between 2008 and 2009. By turning away some prospective customers, the brand broke through the beer category noise and dramatically increased its appeal to the RIGHT customers.

Do you know who your brand is for? Give some thought to what defines your sweet spot customer. Where they live, how much money they make, what they value. Once you’ve come up with a few ideas, then think about who your customer ISN’T. It just might be that determining who is wrong for your brand is the most right thing you’ve ever done.
Posted by Christie Harper at 11:13 AM 4 comments:

The cocktail party conversations about Toyota’s recent troubles have been very interesting to us from a brand perspective. While there are certainly the jokes about drivers being worried every time they see a Toyota pulling up behind them, we have heard a greater number of comments from those quietly loyal to the Toyota brand. I must confess that I am one of those Toyota loyalists, having driven both Toyota and Lexus vehicles at various points throughout my adult life; and I found myself skeptical about the news coverage of Toyota’s faults, and forgiving of the brand in general for any missteps. And as this story has unfolded, I have learned that I am not alone.

Recently overheard comments from the Quietly Loyal include: “You’re more likely to get struck by lightning than to have a gas pedal problem with a Toyota.” “They were the first to make a real hybrid, and for that reason alone, I will never buy another brand.” “If I needed a car right now, I’d buy a Toyota – this is probably the best time to buy one.”   In fact, just this weekend, NPR reported that Toyota sales in March have rebounded to pre gas-pedal levels.  This rebound is attributed to aggressive sales incentives, which likely serve to reassure the Quiety Loyal, not to convert the Overtly Afraid.

Whatever you think about Toyota’s recent issues, the Quietly Loyal provide a great example of what we call the “brand bank account.” This is based on the concept that brand equity can be built over time and essentially put in reserve for when the brand needs excess equity to help it weather a rainy day. Toyota has spent decades building up its brand bank account with its consistent delivery on the promise of quality and reliability, and more recently, innovation. While the recent turmoil has significantly drawn down this equity, it is likely that Toyota’s brand equity will remain “in the black” during a situation that would put other auto brands under.

You do not have to be a brand the size of Toyota to benefit from a brand bank account. Imagine Company X, a small company that continually delivers on its brand promise, day in and day out. But something changes – a principal gets sick, or the project manager goes on vacation, or there’s just a slump, and the promise delivery suffers. Chances are, because of the equity Company X has built up by consistently delivering on its promise, customers will give the company a chance to recover and regain its momentum.

Next time you hear some news about Toyota, consider your own organization’s brand bank account. How rich in brand equity are you? If you’re feeling a little equity-strapped, what could you do to enhance promise delivery so that you can build up those savings for a rainy day? Hopefully, you’ll never need it. But it’s always good to know it’s there.
Posted by Christie Harper at 11:31 AM No comments: 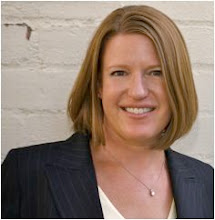